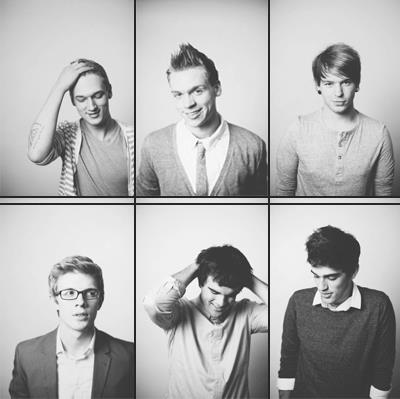 Paradise Fears is a six-piece pop rock band from Vermillion South Dakota. The band consists of Sam Miller – vocals (@samtwomiller), Cole Andre -guitar,vocals (@paradisecole), Jordan Merrigan – lead guitar (@jmerrific), Marcus Sand – bass (@markymarky69), Lucas Zimmerman – drums (@lucaszimmerman7), Michael Walker – piano (@mjwalker0).  The band has toured with All Time Low, The Cab, the Downtown Fiction, and many more and are currently headlining a tour of their own. Later this summer you can catch them on tour with Forever the Sickest Kids, Plug In Stereo, and It Boys.  The band has two EP’s, one full-length album, and a single on iTunes as well as many covers on YouTube. Recently the band won the Honest Reviews Corner Cover War with their version of Call Me Maybe. For more from the band check out paradisefears.com.

On a scale from 1-Michael, how sassy is everyone in the band?

“Well, obviously no one’s sass can compete with Michael’s. That kid sweats sass. We all certainly have our sassy moments though, I’d say Lucas is probably the runner-up on the sassy front. Everyone else is tied for third. “

“I like to think experiences are all about how you perceive and interpret them, so I do my best to avoid the creepy label. I enjoy every fan experience, no matter how extreme. I’m flattered on a daily basis. “

How did you ﬁnd the ﬂyest merch-man around (AKA Anthony)?

“Legend has it he was put in a wicker basket, and floated down the Nile to the lavish state known as New Jersey. Then he joined a band that we toured with, and we all fell in love.”

Do you plan on ever going to back to college?

“I wouldn’t mind going back to college someday, but only if I was able to give it my full attention. Trying to balance the band with school would just be a nightmare, so for the time being, the road is my classroom. (Boom).”

Do you ever regret putting off school to pursue music?

“Not for a second. Education is definitely VERY important, but I don’t think it has to come from an accredited institution. I know we have all learned invaluable lessons whilst traversing the US of A and Canadia.”

Where’s one place you haven’t played yet, but would love to?

What are you’re thoughts on saran wrap?

What was the reaction of Vermillion as soon as you guys “made it big” as a band (as it is a super tiny/adorable town)? Do people treat you differently when you’re back home?

“People have never really treated us differently, but they certainly seem to be pretty excited for all of our success. I don’t think some people quite understand what we really have accomplished thus far, but I think it’s clear to all of them that we are taking this very seriously, and have intentions to take it as far as possible. We owe a lot to the town we grew up in.”

Which is your favorite tattoo and what’s the meaning behind it?

“I’ll try to make my response equal to 4 total responses. The tattoo I have on my shoulder  reads |life| = to live it. For you non math nerds, that says “the absolute value of life is to live it.” It’s something I thought up my freshman year of college, you could call it my version of living life to the fullest, don’t have regrets, etc. It’s something that I can constantly find new meaning in and draw inspiration from.”

How do you handle becoming a bigger band and still maintaining a personal relationship with your fans?

“It definitely isn’t easy. It’s something we are all still working on, because we know how important it is to respect and value the relationships we have developed so far, because they are one of, if not the, biggest reasons we’ve made it to where we are now. Luckily, we live in the social media age, so we are able to contact our fans directly and conveniently. There’s nothing like a little tweet spree to remind me of how blessed we are to have the following we do.”

How does it feel knowing that your music saves lives?

“Surreal. Like nothing else. I know one of the reasons I started playing music was because of the connection I felt with my favorite artists growing up, and to be on the reverse side of that connection is a source of endless gratification and reassurance. One of the many reasons I never want to stop playing music.”

WHO IS UNCLE CHEERIOS?

“I HAVE NO IDEA BUT I WISH I KNEW. My gut tells me he HAS to be related to either Tony the Tiger or the Quaker Oatmeal guy. “