Now that auditions are over, the time has come to find out the SYTYCD Season 9 top 20. Last night showed one of the most stressful weeks of the competition for the contestants—Vegas week.  This week consists of various rounds of choreography in which the dancers have to prove that they deserve to be in the Top 20.

Before the choreography rounds began, each dancer performed a solo routine. Hampton Williams—the exorcist dancer from the Dallas

auditions—was the first dancer to perform a solo. I thought he did really well, although it was very similar to his original audition. I would have liked to see something a bit different. He is really good at his style of dance though. After the first ten solos, Nigel stopped everything and brought those ten dancers on stage.  They ended up cutting two girls, while the eight remaining dancers moved on to the next round. We have seen so many extremely talented dancers in this season, I don’t know how the judges were able to decide who to cut and who to keep. I’m glad I don’t have that job. By the end of the solo round, 51 dancers were cut from the competition.

The choreography rounds began with a hip-hop routine by Comfort and Twitch. We have seen some pretty incredible hip-hop dancers this year, including Hampton, Andre, Boris and Cyrus. Just because someone is more skilled in a certain type of dancing, however, doesn’t mean they won’t have challenges when it comes to the choreography in Vegas week. A lot of these dancers have never been through actual choreography. All they have done is their own dancing, so when it comes to learning someone else’s choreography, they struggle. Hampton is a perfect example of this. He has never been trained in someone else’s choreography before, and he had a very difficult time with it. He ended up leaving the competition because he just couldn’t handle it. Andre from the group Dragon House also ended up leaving. I know I was sad to see them just quit like that, and I’m sure a lot of other people were as well.

Boris Penton, another Dragon House member, was in the first group to perform in the hip-hop round. Unfortunately, he did not learn the choreography well enough and he was cut from the competition along with praying mantis dancer Gene Lonardo and mother Bree Hafen. While some of the hip-hop dancers seemed to be struggling with this round, many non hip-hop dancers were appearing to have an easier time with the choreography for some weird reason and making it through. By 8 PM on day one of Vegas week, 97 dancers had made it through the hip-hop round. Cyrus “Glitch” Spencer, another Dragon House member, was in the last hip-hop group. Everyone in his group made it through to the next round.

Time for day two of Vegas week! Today the dancers had a Broadway routine, choreographed by Tyce Dioro. The theme for this dance was dancers in a night club who take a break for water, and the water has something in it which makes everyone go crazy. It was an extremely fast and hard routine.

The first group for the Broadway round including Whitney Carson and Lindsey Arnold, who we saw last week in the Salt Lake City auditions. This week we found out that they happen to be long time friends (they’ve known each other since they were 9 years old), and they were very excited when they found out they were roommates in Vegas! Everyone in their group made it through to the next round.

For a while, group after group was getting through to the next round. Alexa Anderson, the final dancer to be cut before the top 20 last

season, came back this year and was in the last Broadway group. The judges were still not satisfied with her, saying that they didn’t 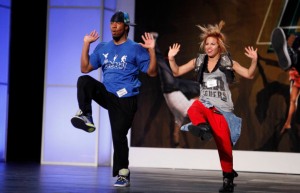 believe her dancing. They decided to give her another chance, though. By the end of the Broadway round, 23 more dancers were cut from the competition.

The next round in Vegas week was Jazz! This was choreographed by Sonya Tayeh. It was a very intense routine with a lot of focus on strength, aggression, texture and musicality. Shafik showed a lot of negativity during this round and ended up bringing down this partner Rachel because he wouldn’t even try to learn the routine. They were both cut. Shafik left with nothing but negative comments about the show, saying he will never be back. I’m glad he is gone. Rachel wasn’t going out without a fight, though. Eventually the judges agreed to let her dance for her life at the end of the round.

After that, the jazz round continued to claim more victims. Danielle Dominguez was kicked in the head on accident by her partner, and was taken to the hospital after her group’s performance. Amelia, the silent movie dancer from New York, was loving Vegas week. She was especially excited for the jazz round. The judges, however, were not quite satisfied with her performance. They decided to have her dance for her life.

By the end of the second day, 15 more dancers were cut and two were barely hanging on. In the dance for your life round, Rachel was first to perform her solo. She decided to “stay true to Burlesque style” in order to show that she is serious about this. The judges were not impressed at all. “Your whole appeal is just sex, you need more clothes,” they said. She was given four no’s and sent home. Amelia was up next. I really enjoyed her performance. She was given a yes from everyone but Nigel, but only because she doesn’t do as well with other peoples’ choreography.

In the next round, the dancers chose their own groups and selected a CD at random that had the song they would be dancing to. They then choreographed a routine. This round started out well, but as usual fatigue began to take over and cause tension among the contestants.

Danielle Dominguez was finally able to come back from the hospital. She found a group quickly, but they had to start over with their choreography which caused a lot of stress. They were the first group to perform. It was not a good performance, due to them being under rehearsed and very tired. They weren’t together at all. Danielle was sent home.

Following that, more and more dancers were cut. It only took one bad performance for anyone to be sent home.

Coming in to end the not so great performances was a group of four guys and one girl who called themselves “The High Schoolers.” They danced to Whitney Houston’s “I Wanna Dance With Somebody.” This was my favorite performance of the night, hands down. It was absolutely amazing. If you missed it, you need to watch it! Everyone in the group made it through.

After “The High Schoolers” performance, group after group were put through to the next round.

The final group for the jazz round had three dancers who made it to Vegas in previous seasons, including Alexa. They danced to The Wanted’s “Glad You Came.” The judges were still not impressed with Alexa. She had a little bit of a breakdown trying to convince the judges that she deserved to be there, and in the end the judges put the entire group through.

Ballroom was the next round. Cyrus was in the first group, which was dancing the Cha Cha. Everyone in the group was put through except for Cyrus, who struggled and was told to dance for his life. 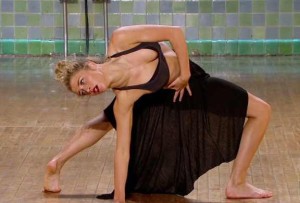 Alexa was in the final ballroom group. She did much better this time. It was one of the best performances of the day. The judges were very happy and proud of her.

Cyrus danced for his life next. The audience was blown away by his performance, and the judges sent him through to the last Vegas round!

Contemporary was the second to last round. The dancers gave it all they had in this round. The judges decided to leave all the results until the end this time. Cyrus, Alexa, and Amelia were all put through to the final round. Whitney and Lindsey were put through as well.

Before the final round, the medics were called again when Joshua Alexander did a backflip and landed on his head.

The last round was definitely the hardest round. This was the dancers’ last chance to prove to the judges that they deserve a spot in the top 20. They each performed a solo, and then told the judges why they should stay in the competition. Alexa was up first. She said she wanted America and her family to be able to see her grow. Cyrus was next, saying he wants to entertain people. Other dancers followed with things like “I don’t want it to stop here,” “I want to touch peoples’ lives,” and “I’ve worked so hard for this.” The final dancer to perform a solo was Chehon Wespi-Tschopp. All I have to say about his performance is WOW. He is an extremely talented dancer! That was definitely a great way to end Vegas week. 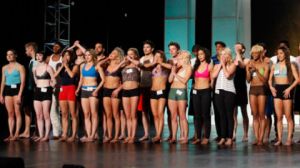 At the end of the show, Nigel called all the boys to the stage, where five were cut. Adrian from season 7 was one of these boys. Next, the girls were called to the stage. None of them were cut. So 35 dancers survived Vegas week!

And that’s the end of Vegas week! Make sure to watch next week to see the revealing of the Season 9 Top 20, and see what happens with Joshua!